After patiently making our way out of Auckland through the wet rush hour conditions we were on our way and after a quick bite to eat at the Loose Goose in Tirua we arrived at the All Season’s Holiday Park in Taupo.

After the drive it was straight into the hot pool to relax with a nice cold beer and discuss what lay ahead for the weekend. Whether it was the steam coming off the pool or the fact we were in relaxing mode we didn’t see the “No Alcohol” sign and got a telling off from the owner.

Jerusalem Bay to Kaiapo Bay via the Maori carvings

Saturday morning started wet and yucky and the weather looked like it had settled in but after breakfast things began to change for the better. Already prepared we headed off around to Jerusalem Bay where we launched and set off anti-clockwise around the lake. 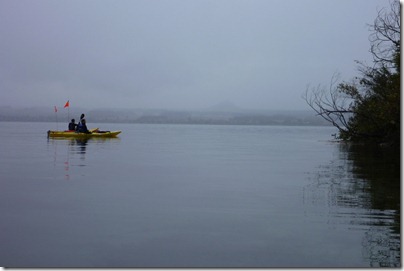 Making it to Kaiapo Bay we left the return trip to explore every nook and cranny. We had seen reports that there were other carvings at the northern end of Mine Bay but we didn’t see any evidence of these and put them down to people getting confused with the Southern end of Mine Bay. 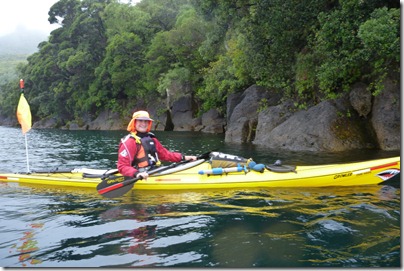 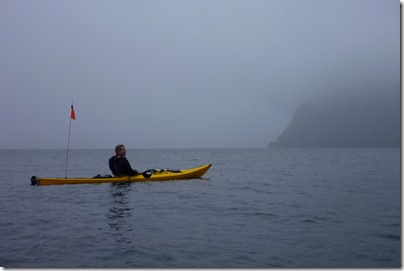 In the misty conditions the trees played hide and seek in the cloud yet the colours of the Lake bed shone pure white and blue like on a bright sunny day. In such as short piece of shore line the landscape changed from smooth stones, sharp rock and cliffs, native bush including Kowhai, sand stone shelves with mushroom like formations, native grasses and weed and even pine trees. 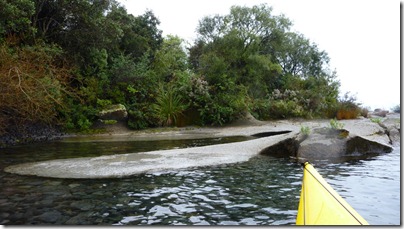 Unlike last year when we needed to keep our distance from the shore and breaking waves, this year we managed to have a detailed look and admire the carvings created by Matahi Whakataka-Brightwell in the late 70s. 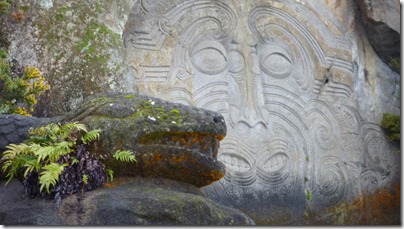 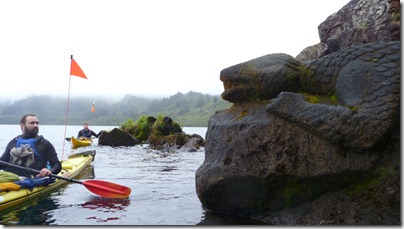 After a late but lovely lunch put on by the ladies we set off for Lake Hinemaiaia so we could be off the water before it got dark. After the constant rain heading into the weekend the road was wet and muddy with large puddles but no one got stuck in the mud (figuratively or physically). 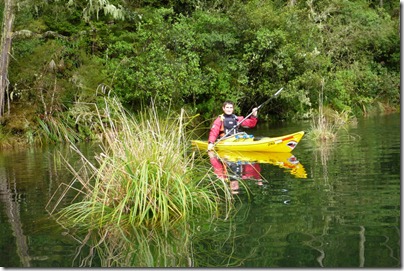 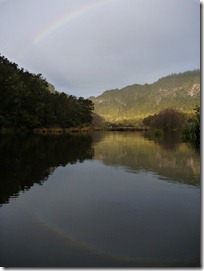 Progress was slow as no one wanted to break the surface of the water with their paddle. A couple of strokes then gliding through the mirror surface. The dark water enhancing the mirror effect so even rainbows reflected in a full circle.

The constant rain in the past week hindered access to the waterfall. Waters were flowing more quickly and we were unable to make the last push through a 1 meter wide gap with cliffs either side (no where for the paddle to go). On the return trip we played hide and seek in the reeds of the swamp and make it back to the cars just as a sun set. 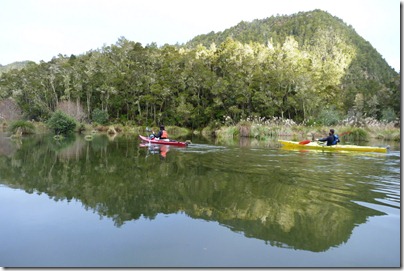 Last year the folks at Orakei Korako didn’t want us using their jetty. Whatever the reason we found another entry point upstream which we used once again. 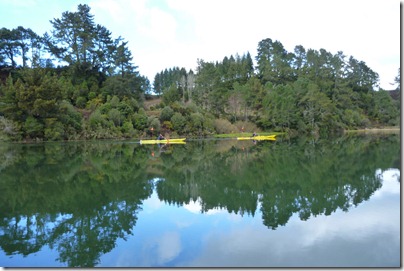 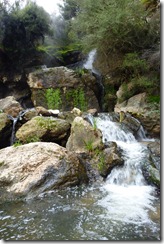 Assisted by the river flow we meandered down river keeping a careful ear on possible jet boats but there were none. We explored the warmth of the thermal springs flowing out into the Waikato River including the hot waterfall complete with a Geyser warning. We had showered the previous night so considered ourselves clean enough and opted not to take a dip.

The steam from Orakei Korako was visible over the last corner so we knew we were close and dived in for a detail look and to warm our buttocks. The kayaks providing just the right amount on insulation. 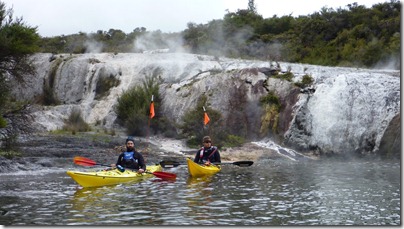 We would normally turn around here but the night before over a few Stones Green Ginger Wine’s we modified the plan and carried on down river. This appeared to be a favourite spot for duck shooters with many hides only accessible by water.

Unfortunately the previous wet weather played havoc with our pick up point and Megan managed to get us on the mobile to update us on a new location closer to the dam. The road was just too muddy to get through and didn’t add a lot of paddling. 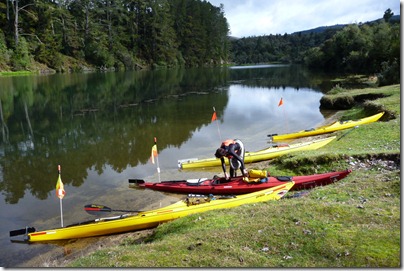 Note: There now appears to be public access to the water at Orakei Korako.

You may want to have a read about the same trip last year (Kayak Fire and Ice in Taupo) as it was quite different.