Kayak Fire and Ice in Taupo

To make the most of the weekend we made sure we were down in Taupo for an early start the next morning. The Loose Goose in Tirau provided sustenance along the way and after a quick scout around the All Seasons Holiday Park in Taupo before we settled in for the evening. 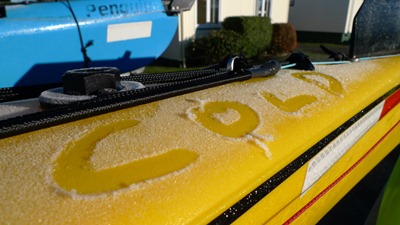 Saturday morning was beautiful although the wind was planning to get up and we couldn’t see the mountains across the lake. We popped in to see Steve at the local Canoe and Kayak shop to get some local advice and go through our plans. He gave us some great tips so we set off for our first explore.

After driving around to Jerusalem Bay (just around from Acacia Bay) we launched and headed around the point to check out the Maori carvings at Mine Bay. Created in the late ‘70s, Matahi took four summers to create the carvings. Not the best shot but due to the waves and swell it was a shot all the same. 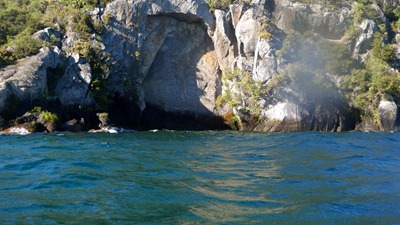 The southerly wind was cold and the 60km of open water ensured the waves were big and steep. This made the trip uncomfortable so as soon as we found the carvings we put our tails between our legs and hi-tailed it out of there. Back in the sheltered waters of Jerusalem Bay, the conditions were quite different . The  sun was shining and it was warm, the perfect spot for lunch. 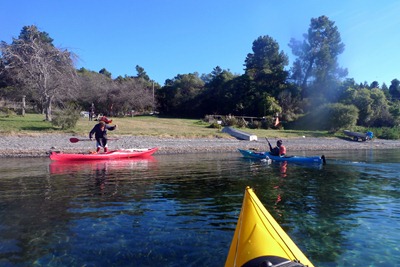 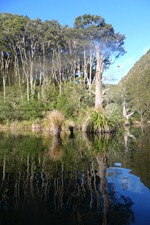 That evening I was considering a night paddle so we at least went to check it out. Just before Hatepe (about 30 minutes South of Taupo on SH1) we darted inland and found a small hydro lake. We launched and after only about 10 minutes we entered the river system above the lake. It was cold and the sun had a hard job making its way into the valley to melt the frost at the sides of the river so it was no surprise we struck ice. Not just a little big but whole sections of the river sheltered from the main flow. 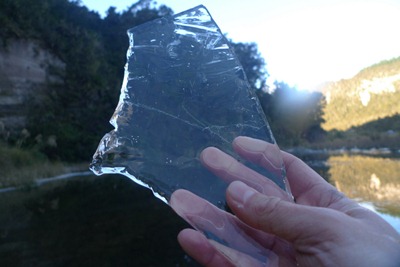 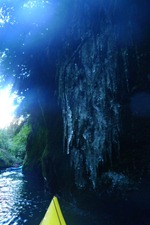 Further upstream the canyon walls closed in so we headed further up stream in smaller groups. Stalactites made of ice from the dripping foliage lined the walls of the canyon and some were massive. The only flowing water was the fast moving main flow and a water fall up on the left. There was just enough room to turn the sea kayaks before we headed back out down river.

After the canyon, we explored a lagoon area where the last of the days sun was hiding in a corner, the birds were playing in the trees whilst we played in the ice covered water. It was then back to the camp ground for a well deserved soak in the hot pool, dinner and a spa. 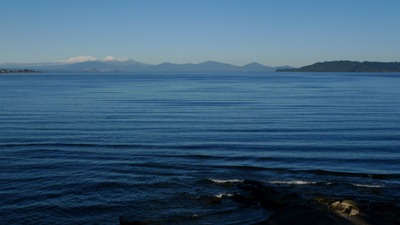 Sunday was another beautiful day and this time we could see the snow capped mountains 80kms South of Taupo. We headed out of Taupo and up to Orakei Korako. The directions took us to the shop and ferry where there were no launching points (Actually the camp ground was a building site and due to OSH regulations they didn’t want us using their Jetty). We headed back and found a bridge with access to the Waikato river where we entered the water. Brett feeling a bit poorly minded the cars sitting in his chair on the jetty covered with his blankie. 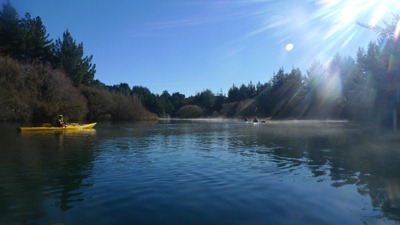 We set off down stream keeping in mind we would need to travel back up stream against the flow but it wasn’t that strong. We quickly discovered jet boats use this section of the river and although the signs said 5 knots through the gorge it was obvious that this apparently didn’t apply to the jet boat. The water acting as a mirror buckled with the wake but never broke in the gorge which was a weird feeling. We continued downstream paddling through the mist until we came across the geothermal activity. 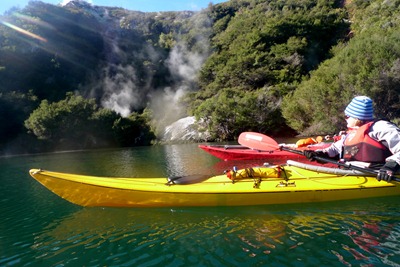 Hissing, gurgling and plopping could be heard from beyond the river banks. The surface of the water was hot and warmed the bottom of the boats. Keeping our distance from the more violet places we took our time checking everything out. We came across a bathing area complete with warning signs and moved along.

The main feature “Orakei Korako” was off limits with access from a private jetty although we explored the river side. Hot water flowed over the large white coloured rocks. A closer look revealed more detail and colour. 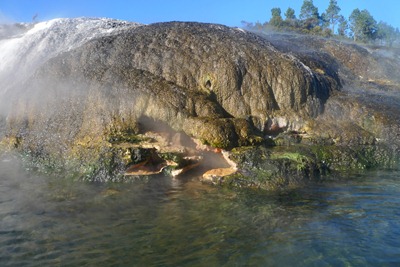 As time was pressing on we returned to the cars for our journey back to Auckland. 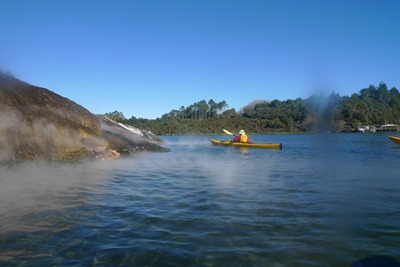 All in all this was an amazing adventure and a perfect reason why winter should not stop you kayaking.