What a stunning morning! After a hearty breakfast we drove the 500M from the camp site down to the water and got ourselves ready. Perfectly formed waves rolled across the still water and although the waves were large everyone made it out without incident except for Brett who took the opportunity to get in some early morning surfing. 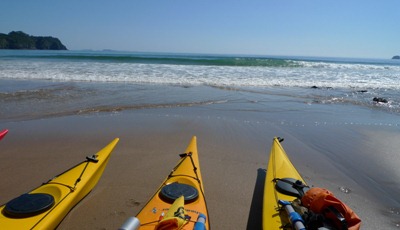 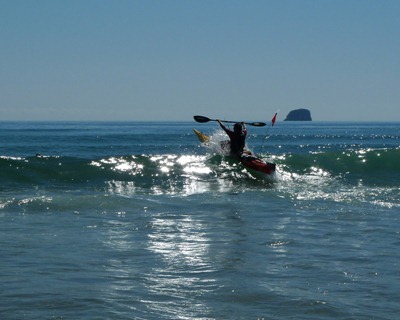 From Hot Water Beach we headed north hugging the coast, rock gardening and popping in and our of the various caves so of which required a torch to explore further. By the time we reached Hahei our stomachs started to rumble but we continued past the crowds and popped into Cathedral Cove (well Mares Leg Cove actually). 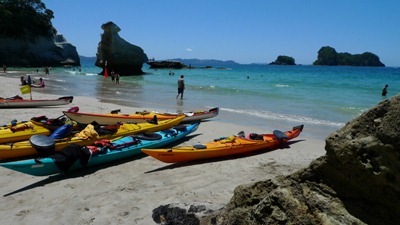 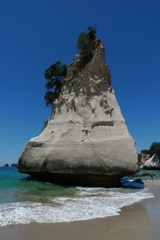 We probably spent a couple of hours there for lunch jumping off rocks, swimming, snorkelling, sun bathing and exploring the beach. Afterwards we headed straight out making through the rock tunnel
on Poikeke Island then around Motueka, Waikaranga and Mahurangi Islands before using the tail wind and swell to return to Hot Water Beach.

Arriving back around 6pm there was only one last hurdle to get back through the surf. The right hand end had the least surf and relatively few people. Everyone made it back safe and sound some showing off their newly found surfing skills.

That night we commandeered one of the camp site BBQs and proceeded to stuff ourselves silly (again).

Some people wanted to soak up the runs rays and/or recover from the previous night so only seven of us set off again making it through the larger surf. We headed South but due to the larger waves we weren't able to get too close to the rocky coast although we did play around the islands.

It only took 1.5hrs to get to our destination which was a beautiful little beach only accessible by boat and we plan to head back at some point in the future. 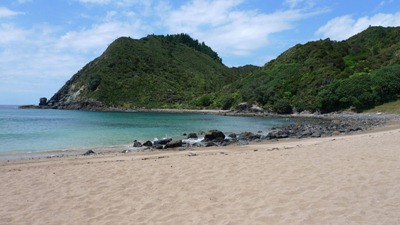 The trip back was a bit harder as the forecast 10 knots picked up to 15 knots but we still made it back in the same time. Some went shore whilst some headed to the Northern end of Hot Water Beach to tackle the biggest surf we have encountered in a kayak. It was only a matter of time before we retired exhausted back to the Southern end of the beach. We dragged our kayaks into the hot river and made our way back up the camp site ending our day on the water.

After tossing around a few plans postponing some to a future date we opted for a short paddle in the Tairua estuary that allowed us to get back to Auckland avoiding most of rush back. We put in at Tairua and paddled across to Pauanui where we explored the canals and fancy houses. Although there were some nice designs, no one came away thinking "I would love a place like this".

The Tairua harbour is one of those lawless places on the water. Jetskis, children, kayaks and speed boats sharing the space as fast as everyone can go with no regard for speed limits or other vessels. I couldn't believe boats just metres from us were passing each other at top speed whilst only a few metres apart in the channel.

All in all everyone had a great time (well that is what they said) and there weren't too many bumps and bruises. 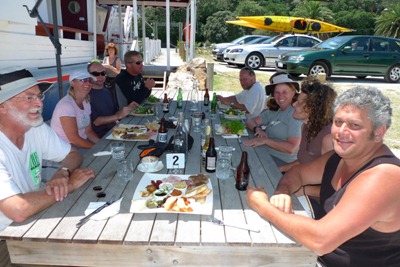