We started the day by surprising Marcel as it was his birthday a few days later. Jorien made appelgebak (Apple tart) complete with candles and we gifted him his first BBQ. We also decorated his convertible car with a few balloons that lasted surprising well whilst achieving a top speed or over 120kmph an hour or so later.

A "Step" is one of those things that until I had been to Holland I wouldn't have even suspected to exist. They're a cross between a traditional scooter and a bike. Loads of fun they have a practical use as well. Almost every kid in Holland is able to step before biking! In the hospital where Renate works they use them to get from one side of the hospital to the other rather than having to walk for 10 minutes. Perhaps Renate can introduce them to Auckland Hospital next year?

We decided on a tour where we could see the city sites by steppen our way around Delft taking in all the important sites and completing a puzzle at the same time. Delft is the Dutch town famous for the white and blue pottery that goes by the name of Delft's Blue. 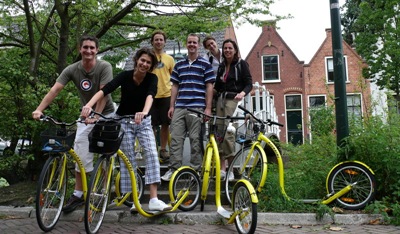 The main highlight of the tour was the Nieuw Kerk (New Church) in the city centre with its high tower standing over the main square. Of course it begged us to ascend its heights so we spent a while exploring its passages. As is happens this is also the home to all the most important people of Dutch history including the various Kings, Queens and Hugo de Groot (Hugo the Great). There was even a space for the current Queen Beatrix to join her husband when she passes.

That evening we headed back to Marcel's place to try out the new BBQ. 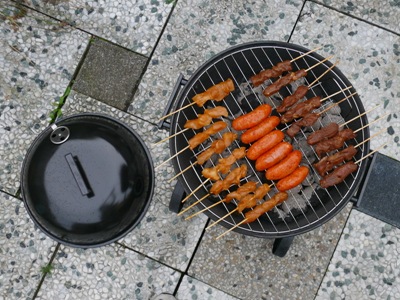