Not the most sophisticated of names if you translate directly to English. Until the death of Queen Wilhelmina in 1962, Paleis Het Loo was a holiday retreat for the Dutch royals. She had decreed that upon her death the palace should be gifted the the public and became a museum. 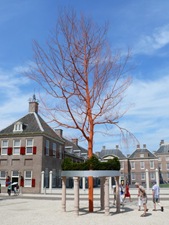 At the entrance stood the Oranjeboom (Orange Tree) which symbolises the royal house of Orange. In New Zealand you'll find Oranjeboom at your local liquor wholesaler as its also a Dutch beer.

Inside the palace seemed a bit different to those across Europe and the United Kingdom. It felt brighter somehow and every room had quite a different feel so we started giving them nick names, the green room, the pink room...  Of course there were all the usual rooms for the King, Queen, chapels etc but there were also a large number of speciality rooms including a room full of animal heads. Cheetah, Bear and Badger rugs complete with heads looked immaculate and Elephant feet stood either side of the fireplace. This isn't my cup of tea however it certainly showed the power and wealth of the royals. 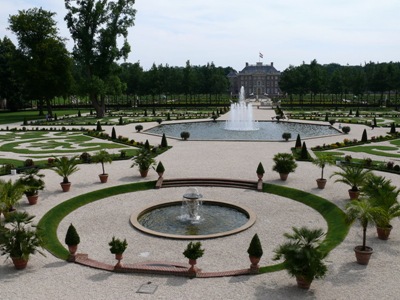 Outside, the gardens unfolded in front of the palace with a huge number of species interwoven with fountains, canals and water falls. What surprised me was that there were a number of plants from warmer climates I didn't expect to see. There were also a huge number of what we would categorise as weeds in New Zealand but they all had their place so it in no way did it look scruffy.

When checking the location of the Palace in Apeldoorn we used Google Maps and the gardens of Palace Het Loo could clearly be seen.

The palace is definitely worth a visit and if you have to compare it to something Hampton Court Palace just outside of London comes first to mind.