Mum and Dad in Holland

Shortly before my original arrival time my parents were due to arrive in Amsterdam. Unfamiliar with the new surroundings Renate and her sister Marja met my parents and helped them to their hotel. They didn't go into the sex museum or wander the red light district but still, they saw as much of Amsterdam in the short time they had available.

A couple of days later Renate and I picked them up and took them on a bit of a tiki tour through some of the smaller picturesque villages. First of all it was Marken, a cute little fishing village on an island connected by a road to the mainland. All the buildings have been maintained beautifully and one old man (with a squeaky voice) lets you visit his house that he still lives in. The contents of which are original including clothes from when he was a boy and its amazing to see how a family of four lived there. 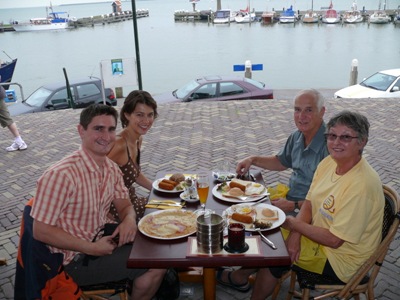 We then headed north a bit further to another fishing village Volendam where we had a spot of lunch and another look around before taking in Edam where the cheese gets its name (of course we couldn't go past without buying some). Whilst in Edam were able to witness the engineering marvels of the Dutch. With no electronics a lone man was able to pull a chain opening a bridge to allow yachts up the canal. Once safely past he walked up the bridge and his weight bought the bridge safely and smoothly back to its original position.

Further north we arrived at yet another seaside village by the name of Hoorn. It was new to us all as Renate and I had never ventured here. Larger than both Volendam and Marken it was  lot more modern as with all the yachts and smart cafes but still plenty of character with the older buildings leaning into the road. Time was pressing on so we headed straight over the IJsselmeer (the once sea turning into lake by the Dutch) to Wijhe where our parents would finally meet. 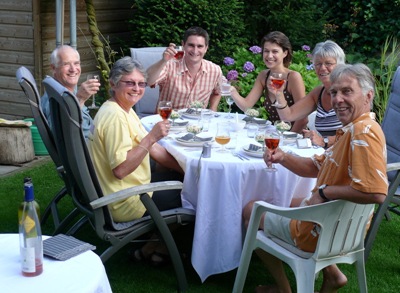 Everyone had a great time and Renate's mother once nervous felt it easier to understand my parents clearer accents. We had a lovely meal and let them get to know each other without us having to hold their hands. Dad and Wim were even whistling the same tunes in the car. Wim and Almah (Renate's parents) showed them around a bit more and had even organised a personal tour of the local Windmill.

A couple of days later we took over the responsibilities and dragged them back to Nijmegen to see where we live and that evening we made them bike into town to go out for dinner.

Thanks Wim for letting us show mum and dad around in your nice air conditioned Espace in the 30 degree heat.