A few of us had decided that two nights would be better than one so after a rushed Fri morning of work we were off stopping for a quick bite in Orewa conscious it would soon be dark. We made it to Sulivan's bay in good time with the remaining daylight assisting us making sure we didn't leave anything important behind (as it turns out eggs weren't that important). 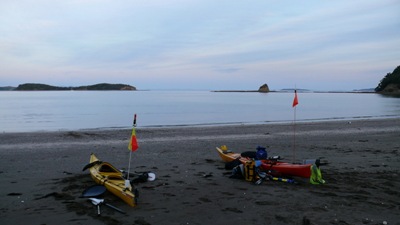 As the sun vanished over the horizon we set of across the milk pond they call Mahurangi harbour. Due to the small amount of light reflecting off the slither of moon it was easy to see the the phosphorous streaming off the paddles and bows of the yaks. It didn't take more than an hour across the smooth water and upon our arrival a flock of Kawahi freaked at our lights and spent the next 15 minutes mostly out of the water. We knew at least one other member of the club was already there and it didn't take long to find Farzad and Lance and setup along side and enjoy the remainder of the evening over a few quiet beers. 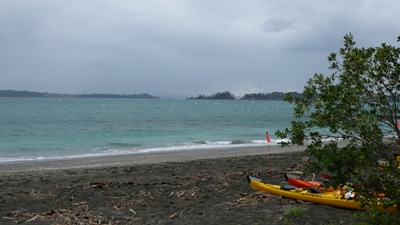 Saturday morning was upon us and the others would be arriving soon. The plan was to head across and explore the nearby Islands of Moturekareka and Motuketekete but the wind was picking up and was forecast to increase in the afternoon. We decided to wait for the others and in an attempt to locate them in amongst the whitecaps climbed the hill behind the camp site. Sure enough this gave us their position but fighting the headwind it would still take them a while so we explored the nearby hills. We made it back to camp in time for their arrival and put the kettle on. The wind was picking up so we spent the day erecting a tarpaulin tent shelter complete with flag, exploring the rest of the Island and of course eating all the goodies everyone brought along. The weather was getting worse and some boaties made a dash for the mainland whilst we made ourselves comfortable. As night fell the shelter stood up to everything nature had to throw at it protected us from the elements while we wined and dined the evening away. 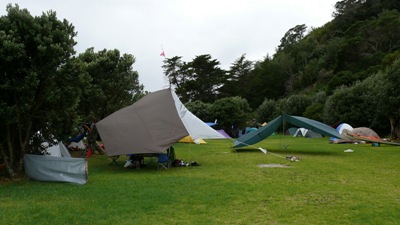 In the morning the weather wind was up even more and most would have been happy to use that an an excuse not to go back to work but instead we packed up as planned. Understandable there were a few nervous faces as we gathers on the beach ready to depart. For safety we broken into pods of about 6 as its easier to keep an eye on one another and prevents running into each other. The swell was two metres with 3 metre waves which certainly felt higher when you were looking down into them whilst sitting in a  5M long kayak. The wind was hanging around the 40 knot mark so we had no chance if it was a headwind. The swell and wind came from astern so although it was possible to paddle and ride some of the waves. Only two people came out so it was a good chance to practice rescues in the somewhat crazy conditions. 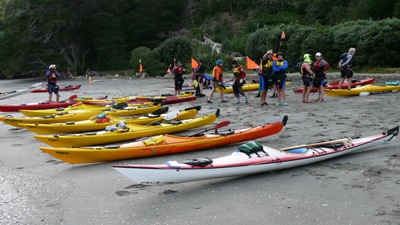 Except for a couple of sore backs we all made it safe and sound stopping at and taking over the Puhoi Tavern for a spot of lunch and tell war stories. If there is anything this trip has taught us even though it was difficult conditions the skills we have learnt can be applied in the worst of conditions.