The Dutch Wedding as a day guest

It was a lovely summer morning and we needed to drive to Enschede to be there for 9:30am. If you're a day guest the Dutch wedding starts very early.

We started with tea, coffee and cake at the bride and groom's apartment with the rest of the day guests everyone dressed up for the big day. Hubert (the groom) was safely staying at his family's place but soon arrived to pickup Corine and together welcomed the day guests. It was then a short walk from their apartment across the centre to the city council building whilst Hubert drove Corine in the wedding car. 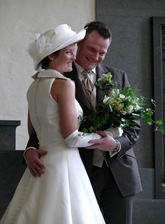 The city council is the official marriage in the eyes of the government. Photos were taken in the large halls before moving upstairs into the small chapel like room where the ceremony took place and the marriage certificate was signed.

Afterwards we headed outside and around the corner to a lovely old Catholic church where we were treated to a traditional Catholic wedding with the lighting of the candles and communion. No so traditional was Hubert's sister Lynette's rendition of James Taylor's "You've got a friend".

From the church Corine and Hubert went for these photos whilst the rest of us headed to Bloemenbeek in De Lutte (the reception venue) for a spot of lunch and waited for them to return giving us time to decorate their room as they were staying the night. A little while later the skies opened with a massive downpour but they arrived shortly after missing the rain. We greeted them with a song followed by a slide show of their lives, the cutting of the cake and opening of gifts.

Next on the agenda was dinner so we found our way around the corner to another room where we were seated at a few large round tables for the evening meal. It was a large piece of eye fillet cooked in hay and was heerlijk (yummy). Dinner was followed by dessert and speeches of which Renate shared her experiences with Corine whilst they lived in Guyana working at the local hospital (I modelled the photos).

It was now time for the party which was located in yet another room. There evening guests were already there and the band was playing a great mix of popular tracks. I knew most of them and everyone under the age of 65 was up and dancing. Most were short versions so you didn't get bored with the songs that dragged on.

There was also other entertainment during the evening. Hubert's work colleagues dragged him up along with some of his other friends for a blindfolded air guitar session. The only thing was that as soon as the song started his friends were taken off the stage leaving only Hubert do the song by himself of which he would make any rocker proud. Lynette also did a fantastic job of singing another song "You just call out my name".

The night ended quite late with a complaint about the noise finishing with ham and mustard rolls and satay. We stuck around afterwards and had a quiet drink as we were also staying at the hotel. Instead of going to bed through we had a swim at 2am in the deserted pool room.

In the morning we sat down with the married couple and their family for breakfast before enjoying some of the surrounding countryside.

I felt privileged to be part of such as special occasion. Congratulations! 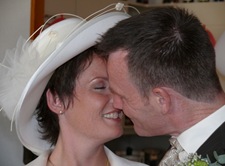 Update: Actually Hubert's parents up up and dancing as well and they are 75.