Corine and Hubert will be getting married on the 20th June so it is only fair they get one last night of freedom. Whilst the girls made necklaces and ate Gourmetten the boys headed out of town for an afternoon of fun and adventure.

It started with a Canadian Canoe trip down a river joining two nearby towns. We caught a ride to the start and jumped in our boats. Everyone wanted to avoid being in the same boat as Hubert just in case he was targeted so at the end only Hubert, Pascal and I were left. We finally launched our vessel after the others giving them a head start.

Slowly we caught up to the other boats and after a brief tussle managed to pass each without capsizing. Some of the bridges were so low that you have to lay down in the canoe or hit your head. Other obstacles included mini waterfalls and getting stuck in the reeds.

As we approached the last part of our journey, we stumbled across some children and educated them in river warfare. We concluded the session by indicating another three boats were following. By the time the other boats made it to the finish they were all drenched however one boat capsized themselves trying to make it under one of the bridges with Chef loosing his glasses. There was even a report of one boat being taken out of the water and walked over the bridge.

The second part of the day involved a game of Boerengolf (farmers golf). Basically the golf club is a broom stick with a clog on the end of it and the idea it to smack a Barney or Thomas the Tank Engine rubber ball around a field, trying to sink it in the holes. It is more difficult than it sounds trying to hit a light rubber ball into the wind from long grass with a clog on a stick but it is fun. 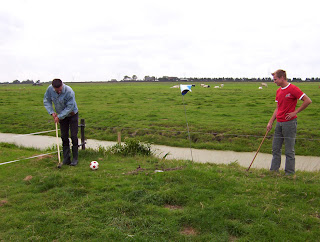 After 9 holes the light was fading so we retired to the barn to clean up, sit down to a BBQ dinner and polish off a couple of kegs of Dutch beer. That's all I remember...

So, the bachelor parties are pretty much the same in both countries in that a good time is had by all but the activities vary somewhat.