Only a four needed for a century

Ryan Air needs to be seen to be believed and for 20 euro return to the London I'm not complaining. Everything is extra including priority seating and putting your luggage in the hold. It's literally a race to grab a seat as you don't have an allocated seat. Onboard the plane the seats are plastic and don't even have seat pockets. The safety instructions are printed on the headrest of the seat in front of you. Advertising lines every overhead locker as they even sell lottery tickets and rail passes on the planes. The worst part is the landing which the pilots are still trying to master.

I was last in the UK five years ago when my brother got married so it was about time I went back especially being so close.

It was my grandmothers birthday on my fathers side and Nan was turning 96 and just as cheeky as she probably was as a young lass. Just imagine what those eyes have seen from 2 world wars, countries coming and going like the tides and of course space exploration and new technologies like mobile phones. 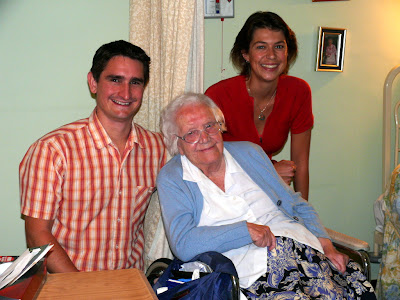 One evening we popped across to Hyde Park as Crowded House and Peter Gabriel were playing. Minutes before we stocked up on picnic food and wine at the local organic supermarket only to have the wine taken away at the entrance. Its amazing how many people can read the back of a ticket and come up with their own view of what is/is not allowed. Crowded House was great live but immediately after the skies opened flooding the area. We managed to find a spot under a closed beer tent to watch the remainder of the concert.

Seeing all the family and friends again was great as this was the main purpose of the trip however I was able to educate Renate on the Prince Albert . I'm sure we also put on a bit of weight with all the eating.