The Wedding of Giny and Nick

Yesterday we attended the wedding of Giny and Nick (our first wedding when we could both attend at the same time).

When compiling the invites the engaged couple decide on how good a friend they are. Should they be invited as a day guest with the dinner or only invited to the party in the evening.

Dutch weddings are spread across the entire day, firstly with everyone visiting the local government in the morning for the official part (signing the documents). Afterwards it is the Church service for those religious folk followed by entertainment for the day guests whilst the photos are being taken. It is then time for dinner and speeches for the day guests. In the evening the big party takes place sometimes filled with songs, sketches and games. 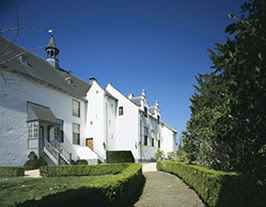 The party was in a beautiful old castle Slot Doddendaal flying the Dutch flag proudly as we entered. We lined up to have our photos taken and write a message in a book in which the photos will be added later. Inside we were offered coffee and tea with a selection of hand crafted cakes. It was a warm night but people like to have tea and coffee after dinner.

Giny and Nick entered the party to a songs sung by the guests. Not understanding them they sounded like the sort of songs you expect to be sung at football matches or out at sea on a cold night. Something was missing, there were no groomsmen or bridesmaids and this is normal. They made their way to the stage and started receiving the guests for congratulatory messages and the gifts.

The stage was set for a live band. In fact a 10 piece band with 3 vocalists, 2 guitars and a selection brass instruments but before they kicked off the DJ played a selection of familiar of tunes including the Cheers theme. Giny and Nick took their place for their first dance to an upbeat number. It was a cover band who did a fantastic job singing in English and speaking in between in Dutch.

I felt like I kept getting in the way. Every 7 seconds or so I was tapped on the arm by one of the waiting staff but apparently this is how they make their money. "Drink sir, drink sir..." even if you are dancing or have a full glass in your hand.

All in all it was a lovely night. Congratulations Giny and Nick.