Every 30th of April Holland turns Orange (the colour and name of the royal family - "House of Orange"). This year the weather was perfect and in reality its a great excuse to have a party with people decorating their houses with the national flag. Traditionally the Queen takes in a small town and a city so we headed straight for Den Bosch to see what all the fuss was about.

First of all we headed through the local Goffert Park where another Queen's Day even was taking place. Queen's Day is also the day when the Dutch have a giant garage sale (Vrij Markt) across the whole country. The city centre parks and streets are filled with people selling all their junk. It was massive and the selection of goods covered topics from old records, furniture and pieces of drain pipes. 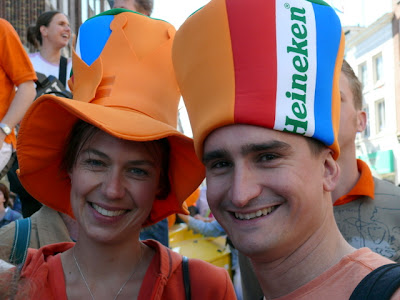 The train station was a sea of people wearing Orange heading to Den Bosch and Amsterdam but we managed to meet up with Renate's sisters and Maarten. On our arrival we were having numerous pieces of head gear offered to us from foam orange crowns to hair pieces of the Queen. The pick of the bunch was the Dr Seuss style Heineken hats.

First we headed to the bank of the canal to watch the Queen arrive by boat. Whilst waiting we sampled Oranje Tompoezen (Custard squares with orange icing) one of the special foods of the day. Not knowing what she looked like, when she arrived I miss took for a lady wearing pink. After her arrival we headed to the town centre as this was apparently the thing to do. The Queen had to make her way from the river taking in all the activities the town had set up (The Vrij Markt, Salsa dancing and sports activities) before making it to the centre.

A few songs and a quick speech and it was all over to we then attempted to find a place for a spot of lunch ("Yeah right", with so many people in town).

We headed back to Nijmegen later that afternoon and checked out the centre which was just as mad with people. Waiters walking the streets carrying beer above their heads and music coming from all angles.

Later that night over dinner we watched is all again on TV.