I've never been keen on the idea of apartment living. Firstly I can't imaging living in a sterile hotel style place and I like to have some greenery (trees, grass etc). In most cities around the world its not an option to have your own house in the burbs. 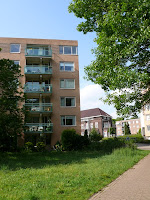 When Renate moved back to Holland after her stint in New Zealand she wanted to find a place that would suit us both. Keeping me in the loop with photos she finally decided on a top floor apartment overlooking the local Park. It's a beautiful location surrounded by green trees and everything is accessible by bike include the local mountain bike park.

It is a spacious single bedroom open plan design on a corner. Two sides are covered with windows providing plenty of light and of course we look out straight onto the trees.

Unlike New Zealand the Dutch are proud of their living rooms and maybe because they also have double glazing there are no curtains (except the bedroom). You can look straight into anyone's house day or night and see what they are eating for dinner or watching on TV. 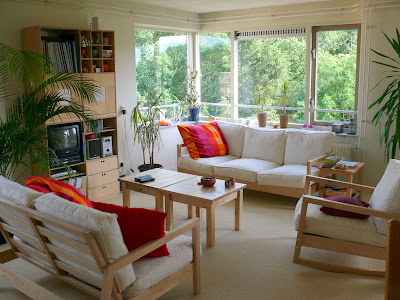 Because of all the greenery there is a huge amount of wildlife in addition to our experience with a Marten. Along with the usual city birds there are also Ravens, Crows, Eksters (European Magpie), Doves, Squirrels (Acorns in Dutch) and even bats as the sun disappears below the horizon.

Another observation is that Dutch houses are built to look old to fit in with their surroundings. I know some of the Dutchies will disagree with this but they are built with brick and don't have any of the modern stylings kiwis are used to. The opposite should be said for the insides which are a lot more modern than the kiwis houses.

It is certainly a nice place to live. Lovely surroundings, plenty of light and of course good company.