You will need to check with Renate but I probably still smell like Turkish cigarettes. We arrived under the cover of darkness and quick settled into our hotel for the night. We arrived late to our hotel room. It was on the 1st floor next to the lift so we heard everything (I bought earplugs the next morning).

Our first sight was the impressive nature of the eyebrows and moustaches putting Movember to shame (women too, just kidding). As we walked into the centre of the old city we could see the mix of old and new. A modern light rail system snakes its way through the Roman ruins, mosques and modern shops. Parks with trees and gardens full of Tulips make it a very green city to visit. Do you know Tulips actually come from Turkey and not Holland? (Holland is full of Daffodils at the moment, not Tulips). 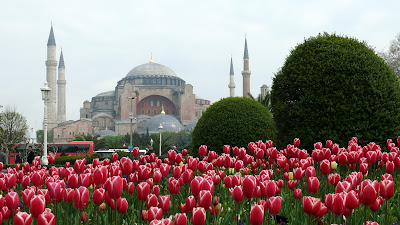 We saw most of the sights in the first day including the Sultan Ahmet Camii (The Blue Mosque), Hagia Sophia, Yerebatan Saray Sarniçi (Basilica Cistern) and Kapali Carsi (Grand Bazaar) managing to escape without spending a cent. Disney must have been inspired by the Mosques of Istanbul when he came up with the famous Cinderella Castle.

Walking through the Grand Bazaar there was the usual cheap souvenirs, fake goods (Levis, Prada, Versace) but also high quality items such as hand carved chess sets, light fittings and of course carpets. Unfortunately I don't need a belly dancing outfit right now. In an attempt to get passers by to stop they ask the usual "Where are you from?" but in Renate's case they start speaking to her in Dutch before she has opened her mouth (Maybe they can smell the cheese). They thought I was either Spanish, Italian and French (or Dutch). On our last night a waiter bought us two Dutch menus.

Day two started very early being picked up at 6:30am by our little bus and driven around Istanbul picking up the rest of the group. The trip went very fast as our guide Murat educated us on Turkey's history and we arrived in Gallipoli just after lunch (more about that after ANZAC day). That night we had opted to stay in a 3 star hotel as we were told there were only dorm rooms at the hostel. It turned out to be quite a luxurious 4 star place 20kms from Canakkale. 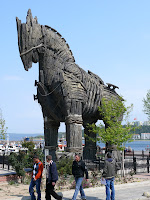 The next morning we spent at Troy which was one of those famous treasure hunts of all time (Machu Picchu, King Tut's Tomb and Titanic). At a time when people thought the city only existed in legends Heinrich Schliemann dedicated a large portion of his life reading literature on the legend then finally discovering Troy. Of course after that he took all the riches and escaped to Germany. The Russians now have them all after capturing them in Berlin at the end of WWII.

The site itself was pretty old as you might expect dating back to 3000BC. What makes Troy unique is that the same site was used until the 1st century BC so it has more layers than a Sarah Lee Danish each unique and identifiable. Who knows if the stories of Homer are fact or fiction but they have certainly made it into modern times.

For the last couple of days exploring the new city walking up the Bosphorus river, checking our Taksim and the spice market back in the old city. I was also due for a haircut so its always fun to experiment in a new city or is it?

We had a great time and thank you to the Turkish people for their hospitality. Just remember to put your rubbish in a bin rather than throwing it over the side of a boat or into the street.