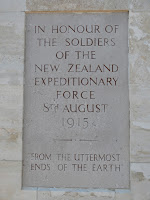 This year we remembered ANZAC day in two parts. The first visiting the site of the battles at Gallipoli and the second part in Den Haag (The Hague).

On the 25th April, ANZAC cove is normally full with everyone camping and drinking. Instead, we opted for an earlier visit with a quiet atmosphere. It was surreal having perfect weather, beautiful scenery with no one else around, contemplating the death and destruction that occurred 92 years ago. 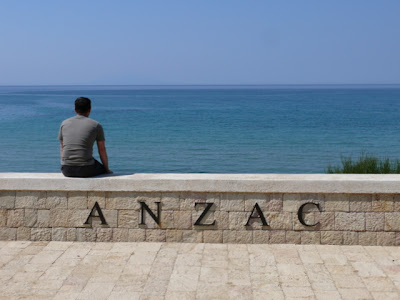 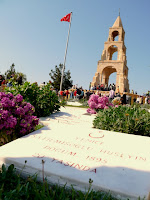 Over the years the trees and shrubs have grown back, the trenches have filled up and the bodies of the allies have been buried in graveyards. Unlike the ANZAC's, British, Indian (Gurkhas), French, the Turkish soldiers were buried where they fell. No grave stones, just names on a memorial.

We spent ANZAC day in Den Haag to attend a morning ceremony at the Westduin Cemetery. It's the first time I have seen VIPs at ANZAC day from so many nations. Wreaths were laid by representatives from New Zealand, Australia, Holland, Turkey, Belgium, Canada, Britain and the US.

I was mainly expats living in the Holland but a few travellers passing through also came along. 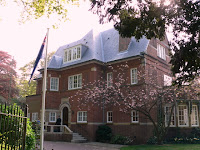 After the ceremony we headed back to the NZ Ambassadors residence for breakfast. Rachel Fry (the NZ Ambassador) was appointed at the end of last year and her Dutch sounded great.

How did WWI actually start?

We all know about ANZAC day but what started it all? I probably learnt this at school but I had forgotten.

An Austrian duke was assassinated in Serbia and Serbia refused to hand over the assassin. Austria declared war on Serbia and sent in troops and from there it was a domino effect. Russia then joined in to help Serbia, Germany to help Austria, France to help Russia, Britain to protect Belgium and France therefore including the rest of the British empire. The US stayed neutral until German submarines threaten their commercial shipping.

WWI helped define New Zealand and Australia as independent nations and was the pre-cursor to Turkey becoming an independent state. Even the communist revolution may have never occurred.

I'll leave you with a quote from the father of modern day Turkey. 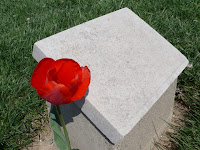 Those heroes that shed their blood and lost their lives... You are now lying in the soil of a friendly country, therefore ret in peace. There is no difference between the Jonnies and the Mehmets to us where they lie side by side. Here in this country of ours... You, the mothers, who sent their sons from far away countries wipe away your tears. Your sons are now lying in our bosom and are in peace. After having lost their lives on this land they have become our sons as well. - Mustafa Kemal Ataturk, 1934