The thermometer on my computer says 2 degrees, the one outside 25 degrees. I know which one is correct as the steam escapes from my mouth. I think Renate uses this old thermometer to make her feel better about the cold telling herself "it's not that bad".

Riding to school at lunchtime on Thursday felt like I had just eaten an entire tub of ice cream. I'm used to the cold and I love it but its a different sort of biting cold, the sort that freezes creatures in fantasy movies. Maybe it was the fact that I was traveling along the road at about 20kmph into a head wind that I was afraid to breathe for fear of my lungs freezing. Before leaving the house I thought "I shan't need my beanie & gloves" (I won't make that mistake again). I found out later that night Renate permanently has gloves in her jacket.

On Sunday we went for a walk in the woods near by to get a bit of fresh air and interrogate Jorien's (Renate's sister) new boyfriend. On the way back it started hailing but not the normal hail we are used to in New Zealand but a white hail with less mass. Later that evening I got my first taste of snow in the Northern Hemisphere but c'est la vie it didn't last. 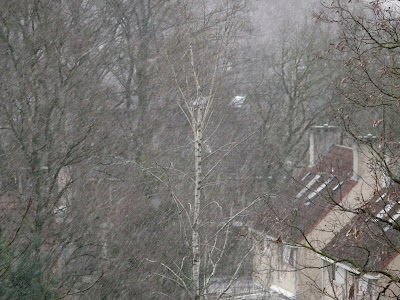 When the sun is shining which is most of the time its rays are strong and warming but as soon as they cease a blank of cold returns. 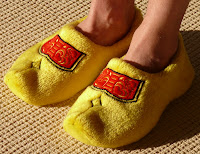 As a welcome gift Renate presented me with a pair of klompen pantoffeltjes (clog slippers). They have certainly kept my feet warm at home.

Renate's place is riddled with pipes and radiators to keep the place warm. As they heat up the place gurgles as if its getting hungry. I don't know the last time I used a heater.