I've been fighting off a cold for the best part of the week. Something I picked up in Auckland before I left but matured somewhat due to the interrupted sleep. It comes in handy having a doctor on hand so the antibiotics were quickly dispensed fighting off the bug.

The week has gone quickly getting everything organised from finding an office chair, signing up for Dutch lessons and registering with the local government so that they know I'm living at Renate's place with her permission (Everyone needs to register where they live).

On Tuesday, Renate had planned a belated Valentine's day and took me to Brugge for the night. We stayed in a B&B very close to the centre sampling the chocolates and beer on offer and taking in the old town and canals. After dinner we walked around the city again taking in the beautifully lit up buildings. 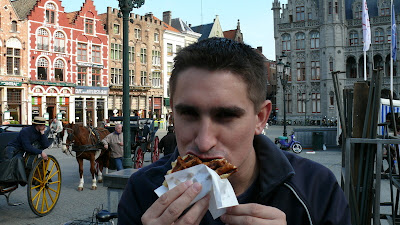 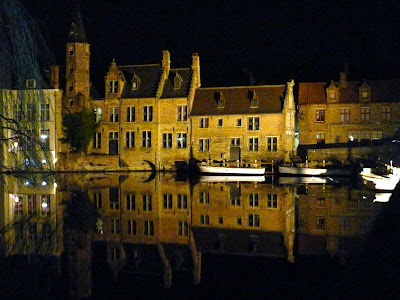 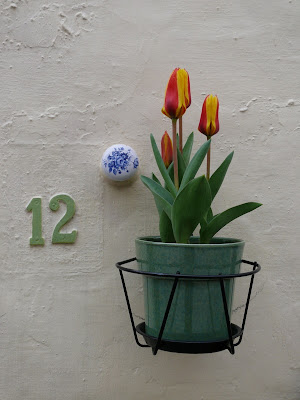 Even though the language is the same and they used to be part of the same country you certainly can see the difference when driving across the border and countryside. Everything is neat and tidy in Holland and their road signs are logical :-)

This week also saw the start on my Dutch lessons. Not on how to be a good Dutchy but how to speak the language. Peter, the tutor calls it the Chinese of Europe in that it's the hardest European language to learn. What have I got myself in for? It's a small class subsidised by the local government with a united nations of people from Estonia, Turkey, Thailand, Iraq, England, Croatia and Nieuw Zeeland. I'm coming into the class 2 months down the road so I'm going to have a bit of catching up to do. Pooky (sp?) has already invited us to a Thai meal in Germany with her Dutch husband.

This afternoon and evening we have a number of Renate's friends and family coming over for her birthday so that will be nice. I can practice some of my Dutch.

Back to driving on the wrong side of the road and happy birthday to everyone having their birthday today. It is supposed to snow on Monday so I'm looking forward to it.